This Willoughby's Serious Select coffee will be roasted and shipped on Tuesdays 9/14 and 9/21.

This year we are happy to offer a new coffee from Abu Farm. Year after year the quality of coffee from Jose Lutrell has improved, and this year we were more impressed than ever. The farm is named in honor of Jose's grandfather and his dream of achieving what he considered the best in a cup of coffee, a geisha raised with the highest standards of quality. ABU is short for abuelo, grandfather in Spanish and the nickname his grandchildren used to call him.  Even though Jose’s grandfather loved the Geisha varietal, we are sure he would be proud of this Catuai Natural ASD which offers a unique sensory experience that is heavy on the chocolate. This coffee is sure to impress and sell out fast due to the very limited quantity.

Abu Coffee Plantations is a rising star in the stellar universe of Panama's high end coffee scene, the Geisha capital of the coffee world today. This means that Abu has not yet risen to the very lofty price levels that have been attained by some of the more noted names in Boquete and Volcan Panama, the two growing areas surrounding the Baru volcano: Hacienda Esmeralda, Elida Estate (world record price for both scores and price), Kotowa, Auromar and others. That said, the coffee is fairly valued only by comparison, especially for the level of quality. The farm is run by Jose Luttrell, who has been until recent years, a working engineer who has turned his attention to the family farm and the lure of growing and selling Geisha, in particular. We met Jose a couple of years ago, tried his coffee and were impressed by it. But, being new on the scene, he met with some difficulties learning the ropes regarding export, all of which has since been resolved. In the interim, the coffee has only gotten better and we want to introduce his coffee to you.

ABU Coffee grows mutiple varietals on their farm in the region of Canas Verdes, Boquete in a humid and rainy microclimate typical of the tropical forest. Coffee trees are grown on the slopes of the Baru Volcano National park in fertile, profound soils of volcanic origin rich with organic content and excellent drainage, minimizing erosion. Average altitude is 1550 meters above sea level. The shade protecting the plantation is given by native trees that grow in harmony with abundant local flora and fauna, respecting the environment and biodiversity. Given its strategic geographic location, sunlight is a key element throughout the whole process. The plantation receives powerful solar radiation, interrupted in the mornings and sunsets by a soft tropical mist known locally as Bajareque and caressed by thick fog.

Harvest season begins in summer, approximately December and extends until March, months when the humidity drops, which combined with the natural shade and the Bajareque mist, achieves the perfect balance for the maturation process. As a result, the cherries develop their maximum potential and intensify the sugars in an optimal manner, enriching the flavor of the grain. 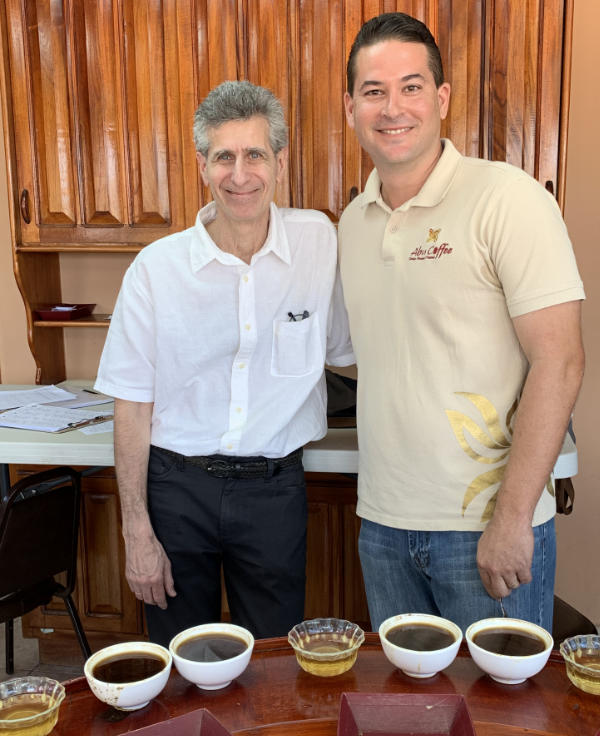 The story behind ABU Coffee

The farm is named in honor the memory of Jose's granfather and his dream of achieving what he considered the best in a cup of coffee. ABU is short for abuelo, grandfather in Spanish and the nickname his grandchildren used to call him.